Not a patch on this beauty

My little enamel patchbox has many secrets. I make up stories about the woman who owned it and the person (a lover) who gave it to her. Because it is undoubtedly a gift. 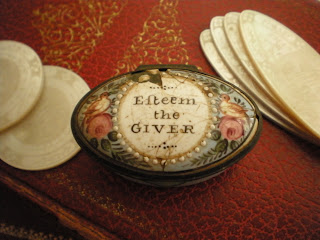 'Efteem the giver' is says on the top - the 'f' being used as an 's' prior to the 19th century (or thereabouts). No-one would buy a patchbox for themselves with such a motto.

The enamel is cracked and the mirror is a replacement of the original but it was love at first sight.

Living in Australia, the antique shops aren't exactly full of these kinds of things. I'd seen pictures, read about them (along with snuff boxes and Bilston or Battersea enamels) and lo and behold there was one in front of me. Well there really wasn't any question, it was coming home with me.

I wonder who she was, where she lived, what she was like, what her favourite colour was and whether she had a favourite patch she wore.

And while patches always seem quintessentially 18th century to me, I wasn't really surprised to discover that the Romans used them. I mean what didn't they do!

Patches were the 18th century equivalent of beauty marks and were traditionally little pieces of gummed black silk taffeta, velvet and sometimes even leather or paper used to draw attention to a particular facial feature, and flatter the complexion.

They were originally used to cover up smallpox scars in the 17th century and over time developed into many shapes including round, square, heart, star, crescent moon, and even reportedly a coach and horses - my mind boggles as to just where that one was placed on the face. I suspect the forehead is the only place large enough but that seems ludicrous. About as ludicrous as mouse skin eyebrows. Ok there are aspects of the 18th century that don't appeal.

These "Court plasters" as they became known, were given different titles depending on where they were placed on the face or bosom. Renowned for her exacting research, novelist Georgette Heyer, refers in her novel "The Convenient Marriage" to a small square of black taffeta near the eye as the "murderous" and mentions another named the "roguish".

In England and France patches were known as 'mouches' (flies) or mushka in Russia.

I found the following information at www.cleopatrasboudoir.com.

"The usage of the mouches was already known to the 17th century, and was the object of a well precise language, much like the language of fans or flowers, it is at the 18th century that they will become the symbols of the costume. Women used their beauty patches to convey a secret message. Madame Du Barry, a courtesan of Louis XV, apparently defined the meaning of the placement as so:
They carried all of the names:

Close to the eye, she names herself provocative or fascinated.
On the corner mouth, this is the lover and kissable.
Above the lip, she is flirty.
Under the lip, she becomes mischievous or flirty.
On the nose, sassy, impudent or strapping.
On the forehead, the majestic or haughty
On the cheek, this is the gallant or flirty one.
On a wrinkle or laugh line, she is cheerful and playful
On the chest, this is the generous one.
On a button, the receiver.
Or well on the chin, would not at all this be the discreet one?

By the mid 1800s, patches began to lose favor, they were no longer worn, but their boxes were still being produced. More recently, several companies revived this old fashioned beauty secret. Places like Caswell Massey and Sephora carried them. About a dozen black silk cut outs that you lick & and apply to your skin. Little figurals included spades, stars, crescent moons, hearts, and even tiny flies, a nod to mouche. You can get beauty patches from www.seasidesisters.co.uk."

Mmmm flirting figures in that list rather prominently! Quel surprise. There is more information on placement and names at www.festesdethalie.org/BAROC/mouches.html with a rather amusing illustration of a lady with patches plastered everywhere. But, as I don't understand French I was lost. I would love to hear from anyone out there who can translate the page for me. And there's more at factualimagining.wordpress.com/2008/10/25/patches-of-every-cut/.

I've also seen vintage patches from the 50s or possibly earlier listed on eBay made of velvet - they'd look like those velvety hairy moles - mmmmm. Think I'll stick to my eyebrow pencil!
Posted by Sandra Brake at 11:11 PM

Sandra Brake
Creative, curious, intrigued by history and everyday objects. I love salvaging the everyday things in life and recycling them so vintage fairs, thrift shops and trash and treasure are my idea of heaven. If I'm not being creative, I get tetchy! And after most of my life as a perfectionist I have embraced the art of the imperfect.

If I had patrician pretentions I think I'd be

made me feel so spoilt

possession of a lady

In search of the right picture

There's nothing quite like an attack of the vapours

Oh heavens I shall faint. Bring me hartshorn!

What I really want is a hedgehog wig

but this will have to do for now

wherever I can inflict them

Shoes fit for a Queen

or at least a Queen of fashion

I just can't stomach that!

Well actually I could, they are truly divine!

Fascinating women of the 18th century