Making your own 18th century shoes 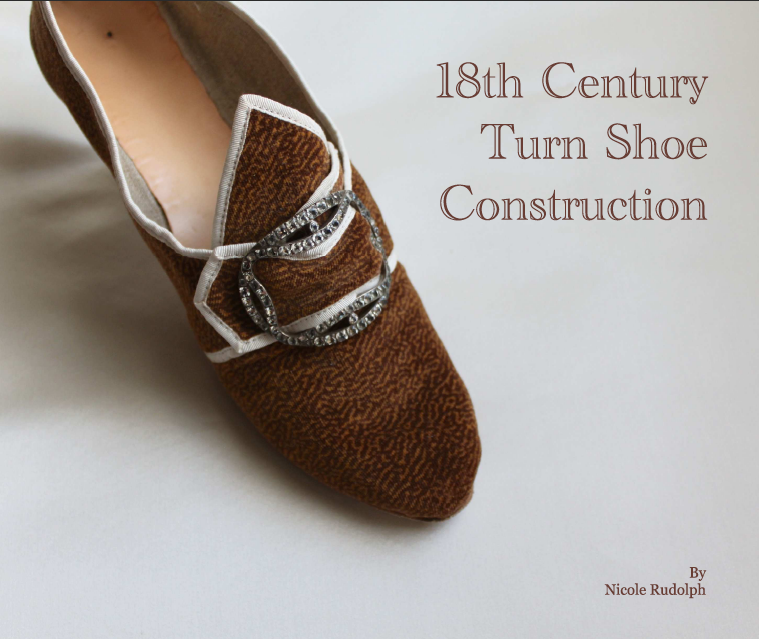 Gosh everyone is writing books but you're safe with me. I have a hard enough time posting on a regular basis.
OK, making 18th century shoes!
Yes I've considered it but it might be the next millenium before I have a go. However if you are all fired up at the prospect of making your own historical footwear then Nicole Rudolph (The Diary of a Mantua Maker) has written a book about making 18th century ladies turn method shoes.
While not a 'how to', the book does detail the methods Nicole has used herself.
The book, conveniently is available both as a PDF as well as in print.
Get all the details at her blog.
Posted by Sandra Brake at 11:37 PM 5 comments:

Richard found and a grrrrr! 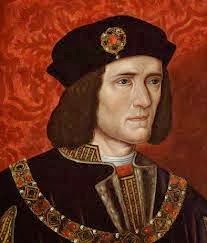 When Richard the well beloved's* body was found last year in a council car park in Leicester, England I was as rapt as the rest of you.
I mean the chances of finding his remains were goodness knows what but lo and behold they found Richard III.
I thoroughly enjoyed the two TV programs I watched on the topic.
A big high five to Philippa Langley who tracked him down and wouldn't give in and kept fighting to discover his whereabouts.
I am sad there is an argument about where he should be buried but the courts will decide that.  Leicester seems appropriate as it is where he has lain all these years but I get the York connection too. Although I don't think I'd consider I had much right if I were one of the distant relatives fighting that challenge.  The King belongs to the country and its people. 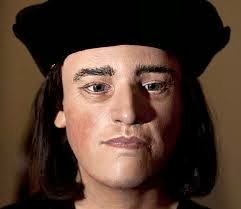 HOWEVER we now come to my GRRRRRR of the title.
They did a wonderful job doing the facial reconstruction.
But for pity sake, what the hell is going on with those eyes?
They make him look cross-eyed!
It doesn't matter which way I look at that bust he still looks cross-eyed! 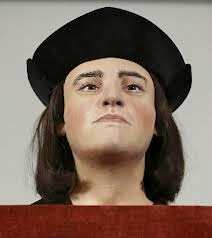 You'd think someone would have said "Geez Louise the eyes aren't right! He's the King, fix them!"
OK I've got that out of my system now, so you can all resume normal programming.
Thankyou.
* Yeah I know some of you will still be Richard III haters but what the heck, he was called well beloved by the people of York which tells me there is another side to the story so assiduously pedalled by the Tudors, who did a real dirty PR job on him to bolster their own snatching of the throne. Encourage Shakespear to write a play about and voila you have the legend we have been encouraged to believe. Perhaps he did connive at the murder of the princes, I don't know but that's another story!
Posted by Sandra Brake at 8:05 PM 3 comments: 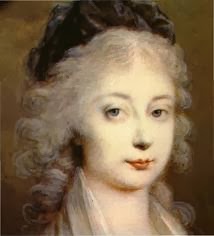 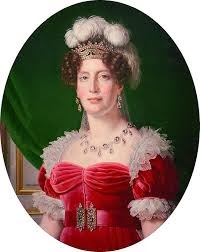 Well the story goes that Louis XVI was not sure who was at fault for no babies so he tested himself out with a serving maid who then had a daughter who was said to resemble the King.

Is this the same Louis I have read about who had trouble consummating his marriage and was deeply moral?
And the grounds for this theory are that Madame looked so different in her older portraits when compared to those when she was young and that she had been shy and affectionate before her imprisonment and was gruff and unfeeling afterwards so she must be a different person.
Really, could anyone expect that child to grow up unscathed after what she went through?
Then we add in the clincher!
In 1807 a mysterious woman who always wore a dark veil over her face and was subsequently called 'the Dark Countess' went to live with some aristocrats in Germany.
Obviously that veil had to hide Madame Royale.
It couldn't be because the poor Countess had had some terrible disfigurement or was hiding from a nasty husband or was just very, very private?  NO obviously not.
Good grief Charlie Brown!
Anyway this has all led to the exhumation of the remains of the 'Dark Countess' from a grave in Germany last year so that DNA testing can be done to determine if she was indeed Madame Royale or in fact Ernestine the supposed illegitimate half-sister. She has mercifully been reinterred.
So what's the back story?
Well it is said Madame Royal was so traumatised by her experiences during the revolution (unsurprising) that she preferred to forego public life and so swapped identities with the look-alike illegitimate half-sister who in fact married the Duc d' Angouleme. There are several variations of this story on the net, including the rape and pregnancy one.
What really happened I don't know but if Louis had an illegitimate child I feel sure historians would have found hard evidence of same.
Ernestine?  Well she was indeed the daughter of a serving maid and was adopted as were other children by Marie Antoinette because she loved children.
Me?  I'll be waiting to see what the DNA evidence turns up. If I'm wrong and Louis had an illegitimate child I think we might as well tear up history as we know it and start again.
I'd love to hear your views on this story -  agree or disagree.
Posted by Sandra Brake at 12:57 PM No comments: 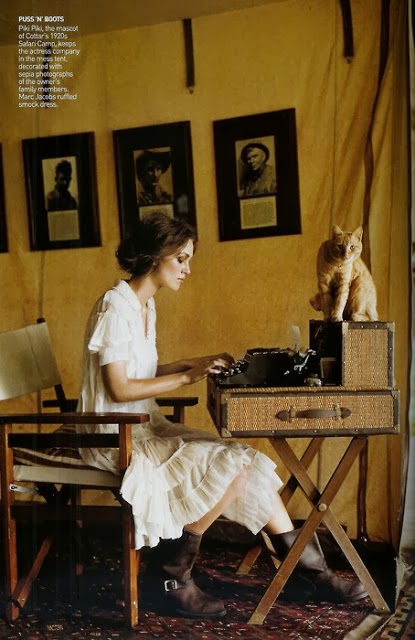 I have been well and truly bitten by the teens, 20s and 30s bug.  Not just cloches, hairstyles and flapper fashions but the whole history of the era.
I watched a TV program recently on 'The History of Safari' with Richard E Grant which was fascinating. (Not killing animals, I'd rather photograph them!) This naturally ties in to the period as does my love of 20s and 30s travel related memorabilia.
The heyday of world travel, if you were rich, was that period between the two world wars.  And I love the clothes and paraphenalia that go with it!
This however presents a problem costume-wise.  I am not a suitable shape for 20s fashions.  I am more a 50s shape.  So I tend to wear 20s hats with modern clothes so at least I can enjoy that aspect.
Recently I wore my black horse hair and lace cloche with a long straight modern black skirt and a tight fitting pullover, over which I wore a short tunic dress with a balloon bottom. I completed the look with my American Duchess Pompadour shoes.
I ended up with a rather Paul Poiret look.
And it worked. 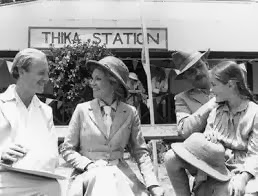 But back to 'The History of Safari', which reminded me of the series 'The Flame Trees of Thika' which starred Hayley Mills and Holly Aird and was set in the years just before WWI in Kenya.
I would rather like an outfit like the one Hayley wore in the series when they went on safari. (I could wear it in winter.) 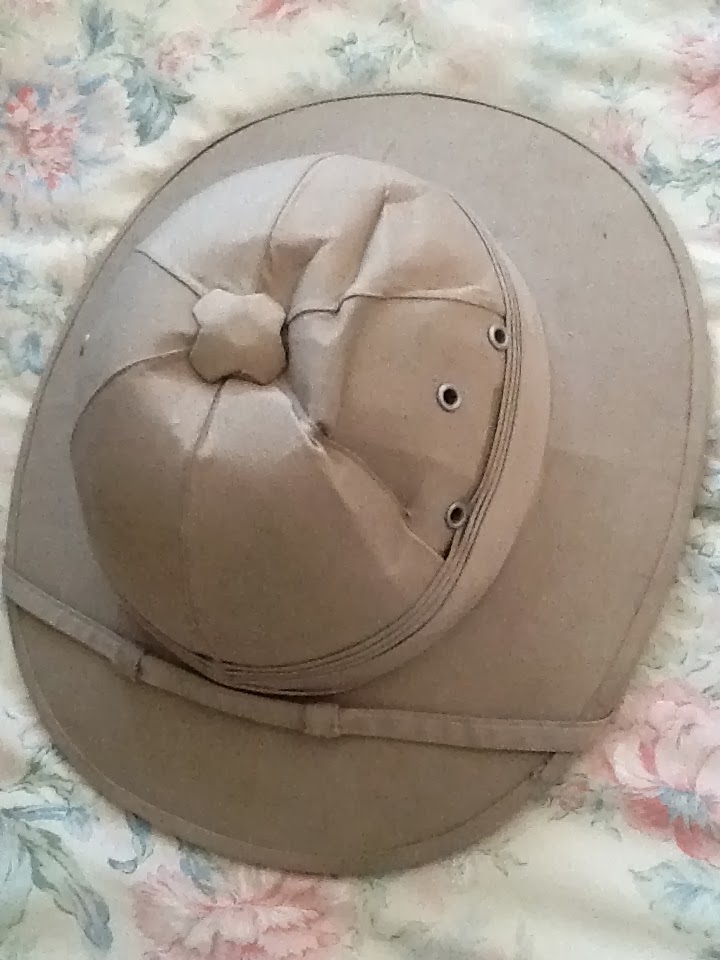 Anyway this, not unnaturally, led to a desire for a pith helmet. I bought said pith helmet but it got badly crunched in the mail on the way from India.  Very sad looking when it arrived.
I am however trying to reconstruct the cork interior so I can get some use out of it. All 50 something pieces of it. I like a good jigsaw! 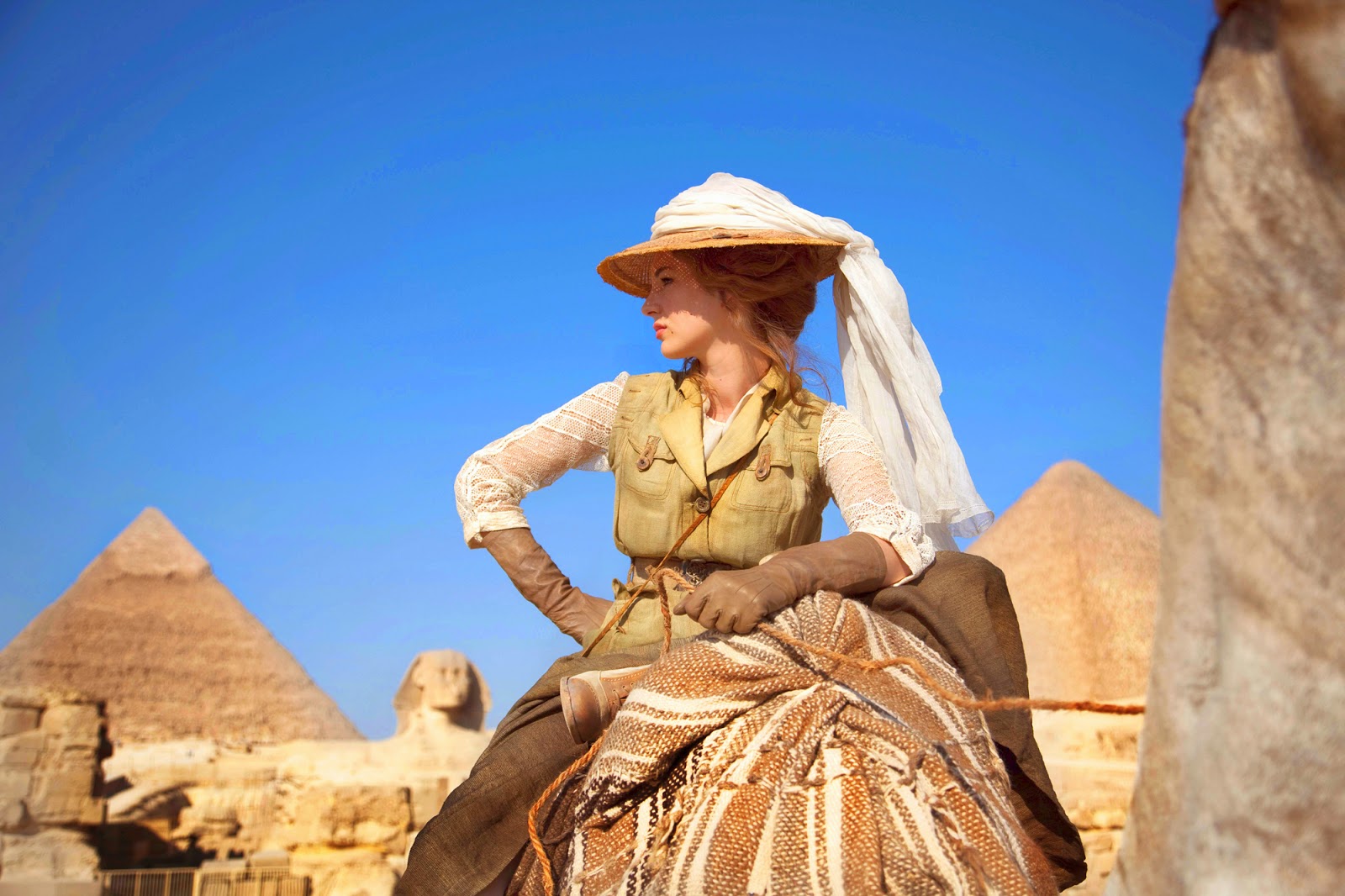 Perhaps with a veil over it like this lady on the camel. That should disguise the worst of the creases which I don't think will disappear. I don't mind her outfit either! 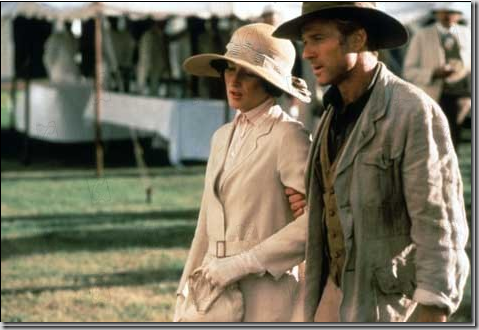 Hayley's outfit is a bit like the one Meryl Streep wore in 'Out of Africa'.
And THAT HAT!  YUMMO!
I'm still working on my pink one, still going in and out all the picots on the grosgrain ribbon around the brim. 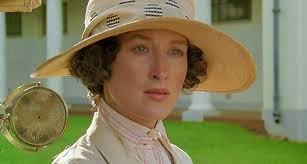 As always too many projects, not enough time.
So do you wear a mixture of vintage and modern pieces?
What sort of items?
Posted by Sandra Brake at 8:48 PM 2 comments:

Give your pouf more oomph! 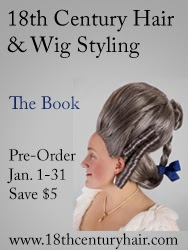 Have you struggled with 18th century hairstyling? Have your poufs sunk like a bad souffle?
Yeah well, you and me and just about everyone else!  Finally someone had finally done us all a favour!
If you haven't heard about Kendra Van Cleave's forthcoming book on 18th century hair and wig styling, you must have been hiding under a sofa. So if you've been down there with the dust bunnies, you can get all the information including special offers now at the link from this photo, at 18thcenturyhair.com/ or on her site at demodecouture.com/. 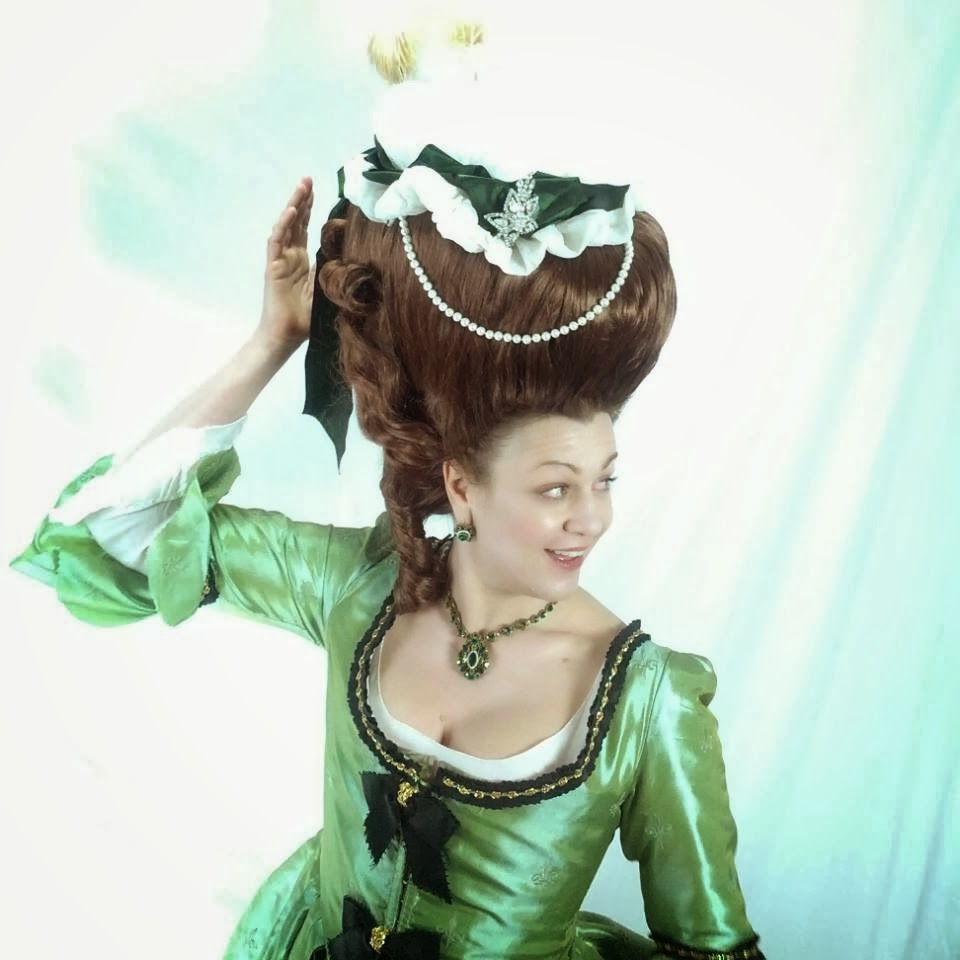 Kendra is known for her research and knowledge of the topic around the world and you can help her get her book out by pre-ordering and save yourself some dollars. Since publishing is a costly business she is doing it through Indiegogo which like Kickstarter is a crowdfunding program.
Many of the other 18th century blogs have information and Lauren at American Duchess has even test run some of the instructions so go check it out now.

No I'm not on commission, I just think anything that makes our joint obsession with the 18th century easier and spreads the knowledge we all aspire to, is worth sharing.
Posted by Sandra Brake at 5:54 PM 2 comments:

Long time no post, Happy New Year and a bit of bling!

Well I hope the new year is being kind to you all and if it's not I hope you find your way through whatever is going on.
Mine has been mixed but I'm grateful for all the good stuff.
I'm plumb out of inspiration for anything creative at the moment.  Well not completely but all my ideas revolve around Christmas stuff which is just a tad out of step with the calendar.
So instead I have been looking at stuff I splurged on a little while ago.
Like this:

So where will I wear it?   No idea, but I had to have it for some unfathomable girlish reason.  Didn't think there was a princess hiding inside but I might have been mistaken. Actually I'd rather have a Grand Duchess or an Arch Duchess to be honest, they always sounded so much more interesting.
Anyway this, I discovered after I received it, is based on Sarah Ferguson's wedding tiara so there's the duchess connection!
Fits nicely and I will look fabulous doing the mopping in it.
Posted by Sandra Brake at 11:18 PM 9 comments:

Sandra Brake
Creative, curious, intrigued by history and everyday objects. I love salvaging the everyday things in life and recycling them so vintage fairs, thrift shops and trash and treasure are my idea of heaven. If I'm not being creative, I get tetchy! And after most of my life as a perfectionist I have embraced the art of the imperfect.

If I had patrician pretentions I think I'd be

made me feel so spoilt

possession of a lady

In search of the right picture

There's nothing quite like an attack of the vapours

Oh heavens I shall faint. Bring me hartshorn!

What I really want is a hedgehog wig

but this will have to do for now

wherever I can inflict them

Shoes fit for a Queen

or at least a Queen of fashion

I just can't stomach that!

Well actually I could, they are truly divine!

Fascinating women of the 18th century